During a Politico Policy Summit in Washington, U.S. Department of the Treasury Secretary Steven Mnuchin said GSE report would be an issue addressed in 2018.

During the summit, he explained moving Fannie Mae and Freddie Mac out of conservatorship will come after tax reform, and will be an issue brought up in 2018. He said the mortgage giants still have a lot of changes they need to make before being moved out of conservatorship. In the meantime, he expects the GSEs will continue to turn their profits over to the government. 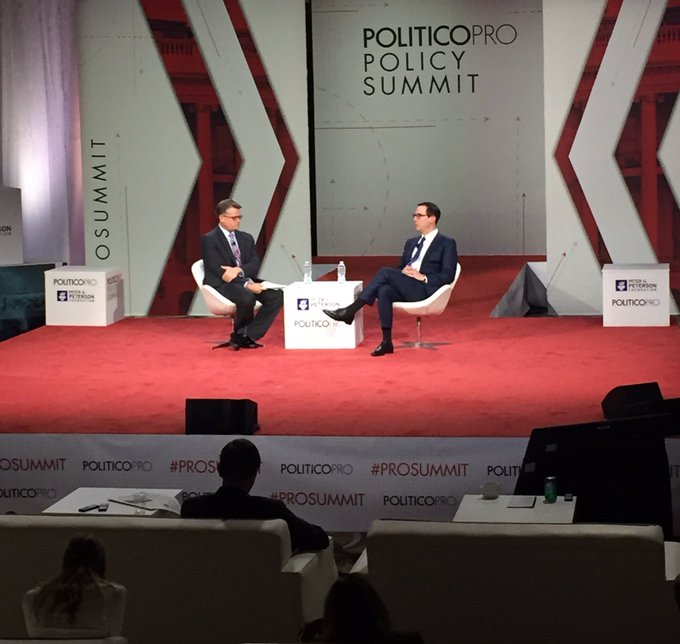 “We need to fix Fannie and Freddie, and that’s something that since I got in office I said I was determined to do,” Mnuchin said.

“Given where we are on taxes, realistically this is now a 2018 issue, but we’re going to fix it,” he said. “And when we fix it, we want to make sure that we never put the taxpayers at risk while at the same time retain the critical 30-year mortgage.”

Had a great discussion on #TaxReform  & how it will help American workers & biz. Thanks for hosting @morningmoneyben | @POLITICOPRO | #PROSUMMIT .

Earlier this year, the Treasury Secretary went on the record saying GSE reform will occur  during President Donald Trump’s administration. He explained that while it may not be the no. 1 priority, it is on the agenda.

Later, in July, Mnuchin reaffirmed that GSE reform is still a priority  for the Trump administration as he testified before the Housing Financial Services Committee.

Now, those awaiting reform for the two mortgage giants have a date: 2018.

Here is a live-streamed video on the secretary’s take on GSE reform and other issues: We offer all types of mortgage home loans that are offered on the market today. Fixed Rates, Adjustables, Perfect Credit or not so perfect... If you can be approved for a loan, we can find the right one for you! Using a Mortgage Loan Officer that has access to all sources of lending institutions helps people get the best loan for their situation and offers all options on the market vs the programs at one bank.

Call Todd Rubick of Amax Lending and tell him why the bank said no... If your tax returns do not show your true income, or credit is less than perfect... Our all source lending strategies can be used to find the right program from the right bank to get your loan approved.